If you're a big motor manufacturer, you have a tough job. Simultaneously trying to find new ways to sell new cars in an ever more consumer-savvy world, while maintaining an ability to make money. One way to do that is to follow BMW’s recipe with their newest 2 Series, which is based on the existing 2 Series, with some borrowed parts from another model. I'll be honest, I really wasn't sure about this car because while I loved one half of its genetic makeup, I wasn't sure about the other half - and merging the two may just be less than ideal.

The car in question is the BMW M235i Gran Coupé. A sleeker looking version of the regular current 2 Series Coupé, with some extra doors, some familiar mechanicals, and a lot of the company's new philosophies when it comes to… Well, just about everything. Most obviously, their new styling philosophy.

I'm really glad BMW didn't just stretch out the 2 Series Coupé so they could add the new doors. This car is very much about BMW’s new design direction, which I quite like. I always thought the original 2 Series was a little bit let down by its almost generic rear end, but there is a lot to like about the 2 Series Gran Coupé - as long as you don't get bogged down in the arguments.

I'm not going to get into whether a four door model should be allowed to carry the title “coupe” simply because it's a new world and four door coupés are part of it. Then there's the grill factor, and how the new oversized approach isn't to everyone's liking. The front end of the M235i does have a large snout, but it kind of works, especially since the vertical bars have been replaced with a mesh effect - on this model only, though. 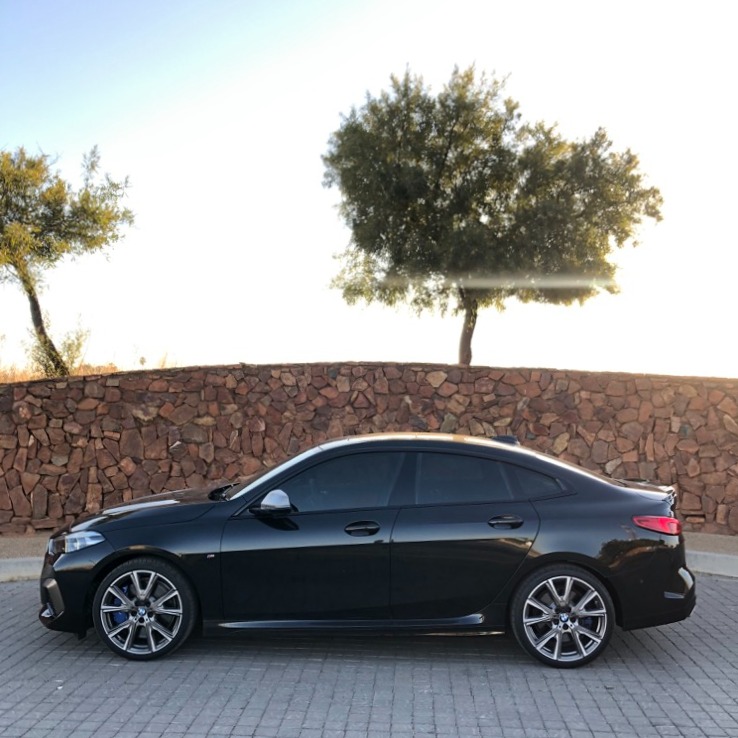 The striking thing about the M235i isn't so much its overt aggression, or the narrow, elongated tail lights which look good as a concept, and work much better here than they do on something like the bigger X4, because the sheetmetal-to-light cluster ratio is a lot better. It's the proportions of the car that are so good. It really is the definition of sleek, and finished in its Metallic Black Sapphire paint job - and on optional 19 inch wheels - it cuts a really attractive figure from every angle. The M235i treatment includes some extra touches: inserts on the corners of the front bumper finished in what BMW likes to call metallic satinated, which is just sort of a brushed bronze colour, and is also on the mirror caps. The brakes get blue callipers, and there's an aero kit that includes an a spoiler. All in all, a very pleasing package and a very different one to the regular 2 Series coupé, which now looks a little bit pudgy by comparison.

When it comes to the difference in the interior of the two versions of the 2 Series, well, that's a little bit narrower. Both feature BMW’s new concept of grouping controls into modules. So things like the aircon controls are directly below the central air vents, and the start button is right next to the gearshift. And with the controls being driver focused, you can get comfortable very quickly in here. There's also fractionally more space in the Gran Coupé, too - rear passengers get 3cm extra legroom. Some of the all-round comfort does dissipate slightly when you're on the move, though.

So far, so good; but now we come to that dilemma I mentioned. The M235i Gran Coupé is obviously very similar to the regular 2 Series Coupé 240i, a car that I love. But it also shares a lot mechanically with the X2 M35i - a car that I love a lot less.

The M240i had a 240kW six-cylinder turbo motor with rear wheel drive, and the car I drove had a manual gearbox - and it was heaps of fun. The M235i is fitted with BMW’s most potent 2.0 turbo motor, but it's still a little bit down on power by comparison. It's also fitted with an 8-speed automatic gearbox.

Not terrible in terms of comparisons, but here's where the worrying part comes in. The M235i Gran Coupé has the same drivetrain - including engine, all wheel drive and mechanical limited slip diff - as the X2 M35i, a car by which I wasn't all that impressed. Just like the M235i spec sheet, the X2 spec sheet made for good reading, but in the end it just didn't seem to come together. And a lot of the initial feel in this car is similar to the X2.

Once you get going, it becomes really obvious that the M235i probably isn't the car for you if you want the smoothest possible drive in your four door coupé. The ride set up is not uncomfortable, but it’s also not shy to tell you that this is a sporty chassis.

M Sport suspension is standard, which means the right height dropped by 10mm, and a harder right set up that sometimes means that less than ideal road surfaces are felt through the seat of your pants. And without the optional adaptive suspension, there's no way to avoid that.

The remedy for the sporty right set up: find yourself some space on a good driving road where you'll find that, I'm happy to say, the M235i hour deliveries in a way that the X2 just can't. The steering input is sharp and accurate (although not that impressive on feel), and the all-wheel drive not only delivers tons of grip, but a surprising amount of feel as well.

You don't have to be pushed anywhere near the edge of your comfort zone to get a feel for what the chassis is doing beneath you, and the feedback just makes you want to keep challenging the M235i. And when you do, it just carries on delivering. It is a marvellously rewarding thing when you give it a chance - and really underlines how disappointing the X2 M35i is.

The power is equally enjoyable. This car always feels a little bit eager, but when you drop it into Sport mode, the Gran Coupé starts to encourage you to do things like try and reach its 0-100km/h times a 4,9 seconds. I'm not a big fan of the fake engine noise that's piped into the cabin, but given how enjoyable the rest of the experience is, you can kind of forgive that little detail.

The power delivery is a constant stream of very pleasing acceleration, and in combination with the ride setup doing its thing, the M235i Gran Coupé is a real joy. If you do find yourself one day with one parked in your driveway, please do the world a favour and make sure you take it for a proper drive as often as you possibly can. The motoring gods will smile favourably upon you.

The sportier 2 Series models have always been enjoyable cars. Now you might look at the Grand Coupé and think - like I did initially - that it exists just to add some extra appeal to the range, with its trendy flameless doors and dramatic rear end. Sure, the M235i does stand out and delivers an enjoyable drive on an everyday basis, but make no mistake: this is a talented driving machine.